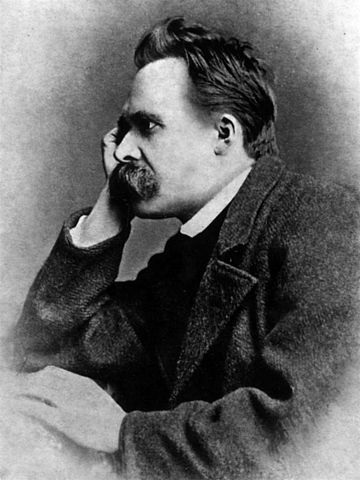 Friedrich Nietzsche's most famous quote is “God is dead.” Many people, including many metalheads, believe this quote was a triumphant celebration, as can be seen by all the metal songs which include it, one of the most notable being Morbid Angel's “Chapel of Ghouls”. This is not the case at all. That quote was not a celebration, but a lamentation.

That sentence comes from Nietzsche's story of The Madman, which was included in his aphorism book The Gay Science. In this story, a madman is carrying a lantern through the market while crying out, “I seek God! I seek God!” The people around him, who were atheists, laughed at him. He then jumped into their midst and said to them:

“Whither is God” he cried. “I shall tell you. We have killed him – you and I. All of us are his murderers. But how have we done this? How were we able to drink up the sea? Who gave us the sponge to wipe away the entire horizon? What did we do when we unchained this earth from its sun? Whither is it moving now? Whither are we moving now? Away from all suns? Are we not plunging continually? Backward, sideward, forward, in all directions? Is there any up or down left? Are we not straying as through an infinite nothing? Do we not feel the breath of empty space? Has it not become colder? Is not night and more night coming on all the while? Must not lanterns be lit in the morning? Do we not hear anything yet of the noise of the gravediggers who are burying God? Do we not smell anything yet of God's decomposition? Gods too decompose. God is dead. God remains dead. And we have killed him. How shall we, the murderers of all murderers, comfort ourselves? What was holiest and most powerful of all that the world has yet owned has bled to death under our knives. Who will wipe this blood off us? What water is there for us to clean ourselves? What festivals of atonement, what sacred games shall we have to invent? Is not the greatness of this deed too great for us? Must not we ourselves become gods simply to seem worthy of it? There has never been a greater deed; and whoever will be born after us – for the sake of this deed he will be part of a higher history than all history hitherto.

Since the Reformation, the people of Europe began to grow skeptical not only of the Catholic Church, but of religion as a whole. This skepticism became even more pronounced during the Enlightenment, when science became more and more able to explain natural phenomena. This erosion of religion's authority would cause a growing number of people to adopt atheism. They felt that not only did people not need religion to explain natural phenomena, they didn't need religion to lead moral lives. Thinkers like Karl Marx saw religion as an oppressive force and that if man wanted to be free, then he needed to do away with it. Nietzsche, on the other hand, was one of the rare few atheists who understood the logical conclusions of atheism.

Many people in the West, especially atheists, don't really understand what God is, mainly because they get most of their understanding of Him from popular culture. They think of God as some bearded man in the sky. Atheists will often mockingly refer to Him as an “invisible sky daddy”. That's not the case at all. God is the foundation of reality. He is the ultimate source of all being. He is the uncaused cause that continually keeps reality in existence. When Nietzsche says things like, “What did we do when we unchained this earth from its sun?”, he is saying that by abandoning God and becoming atheists, humans severed reality from its foundation. God is also the ultimate source of morality, so by abandoning Him, man cuts off morality from its source. Whither is it moving now? Whither are we moving now? When Nietzsche speaks of the “infinite nothing” and “the breath of empty space”, he speaks of nihilism. If there is no God, then reality becomes devoid of meaning. Humanity is reduced to a cosmic accident that dwells in a universe that came into existence and continues to exist for no reason at all, and this leads to overwhelming despair.

Then there is the line, “What was holiest and most powerful of all that the world has yet owned has bled to death under our knives. Who will wipe this blood off us?” If you have ever listened to the Anaal Nathrakh song “When the Lion Devours Both Dragon and Child”, then you will be familiar with that line. What does it mean, though? It means that if people abandon God, then a torrent of blood will follow. This has already happened. In the past century, 262 million people were murdered by their own governments. Nearly all of those murders were committed by secular governments. It is true that people were murdered by their own governments long before the twentieth century, but never on such a grand scale or in such a short amount of time. The fear of God held back the worst impulses of religious people, even if it didn't always stop them from committing immoral acts. There is nothing holding atheists back. If there is no God, then everything is permitted. Nietzsche knew this, which is why he spent his entire life attempting to formulate a moral system without God.

This is what Nietzsche truly meant when he said that God was dead. It was not a celebration. It was a lamentation. And if you're an atheist reading this, then I encourage you to think through the logical conclusions of atheism, because your worldview won't lead to anything good.